Skip to content
Join our newsletter and receive periodic updates of new destinations and much more. Opt-out at any time. 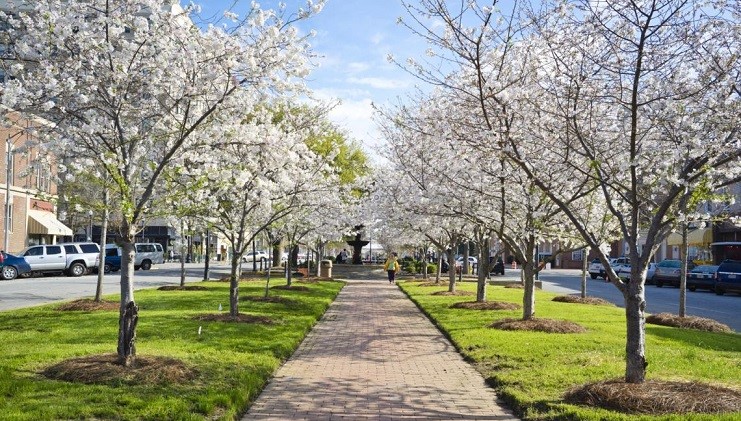 [:en]Welcome to Macon, Georgia, the cherry blossom capital of the world, where the old south meets the new.

Macon, unlike many other southern cities, has retained much of its antebellum and Victorian architecture, and is filled with rich, varied architecture from ornate Victorian homes to public buildings sporting massive columns. Tour a stately antebellum home and you won’t be disappointed. See the mansion that many believed inspired the Tennessee Williams play “Cat On A Hot Tin Roof.” Walk through history of the “fading five” antebellum mansions nestled among the magnolia trees, crepe myrtles and azaleas.

Each spring Macon hosts the annual Cherry Blossom Festival and downtown is filled with the flowering trees and gaslit streets. In fact, no matter what the season, something is always happening. We have many museums including the Allman Brothers Museum, Otis Redding, Tubman Museum and the Museum Of Arts And Sciences. Rose Hill Cemetery, a terraced Victorian graveyard, is often on the “must see” of Allman fans as it’s the final resting place of Duane and Gregg Allman.

The Ocmulgee Indian National Monument offers magnificent views of downtown from it’s great temple mound. The Mounds also has the distinction of the first, and only, Art Moderne visitors’ building constructed by the Park Service.

Hidden treasures you won’t see on any tourist map include Shirley Hills, a pristine subdivision that predates Beverly Hills and retains all of its charm including Jackson Springs Park and homes to some of Macon’s “old money.” The home that Gregg Allman and Cher lived in while they were married is not too far from here. The “shotgun” style house home to Little Richard is open by appointment in the older part of Macon, near Fort Hawkins, another site not to miss.

Interested in trains? Other sites you won’t see on the tourist maps are the approach tracks from Atlanta leading to Terminal Station, built in 1916. While passenger service is no longer available, other sites of interest to train buffs would be the concrete coaling and water tower located behind Terminal Station in the extensive rail yards that remain quite active. Interested in abandoned industry? The old brick works are still standing and sprawling complex that once hauled clay on an overhead bucket system is largely still intact.

Hidden treasures that you won’t see include seeing the home that Greg Allman and Cher lived during the time they were married. Eat at the same cafe that the Allman’s did. Shirley Hills is another interesting and often overlooked area. It predates Beverly Hills and many of the homes are built in a grand style from Greek Revival to the popular Spanish in vogue during the 1920s.

Nearby attractions abound too. Brown’s Mount is the an 189 acre site of woodlands, swamp and the highest elevation in the greater Macon area. Maintained by the Park Service, enjoy hiking trail and ruins of the old cabin with only the chimney remaining. Also near by in a 30 minute drive is the small town of Juliette, Ga., famed for the set of “Fried Green Tomatoes.” Be sure to tour Jerrill plantation while in the town. Run by the Park Service, it depicts life on an old plantation.

These are just a few of the things in Macon. Come and see us.[:]